You are at:Home»Design»New-Builds»TWA Hotel Opens at New York’s JFK Airport 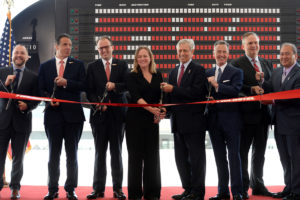 When the TWA terminal opened in 1962, it epitomized the glamour and optimism of the Jet Age. The structure was designated a New York City landmark in 1994 and, after its 2001 closure, was listed on the National and New York State Registers of Historic Places in 2005. 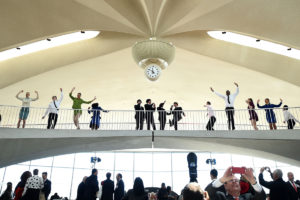 Restoring the building (a project led by Beyer Blinder Belle Architects & Planners), constructing two new hotel wings behind it (designed by Lubrano Ciavarra Architects with interior design by Stonehill Taylor) and building a 50,000-sq.-ft. events center (by INC Architecture & Design) was an endeavor. The project involved 22 government agencies and more than 170 firms. Turner Construction Company began work in the fall of 2016, with roughly 450 union tradespeople on site every day. In addition, dining, retail and amenity partners helped give the space new life.

Along with the hotel opening, Gerber Group opened The Sunken Lounge, The Pool Bar & Observation Deck and Connie. The Sunken Lounge reignites the magic of Eero Saarinen’s landmark 1962 TWA Flight Center, restored as the lobby bar. 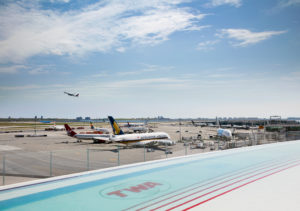 The Pool Bar & Observation Deck has a 63-by-20-ft. infinity-edge pool (turned heated pool-cuzzi in colder months) with views of multiple JFK runways. Connie, one of only four Lockheed Constellation L-1649A left in the world, transports guests back into 1958. Step onto the tarmac and aboard her renovated cabin, where vintage-inspired cocktails and snacks are served.

For more on the TWA Hotel opening, be sure to look out for upcoming Hotel Business video coverage.