You are at:Home»Industry»Research»Trustdata: In China, Online Reservation Industry to Recover by June

BEIJING—Mobile Internet big data monitoring platform Trustdata has released its “Analysis Report on the Development of China’s Online Hotel Reservation Industry,” citing tourism growth in 2019 and a dip in travel this year due to the COVID-19 outbreak. However, Trustdata predicts that recovery could begin as early as this month.

According to the report, the tourism market in China is booming as China’s per capita GDP exceeded $10,000 and its domestic tourists exceeded six billion individual trips in 2019. Compared with 20 years ago, the total domestic tourism expenditures in China increased by 20.5 times to $719.2 trillion (RMB 5.73 trillion), the number of tourists increased 8.4 times to six billion, and the tourism consumption per person increased by 2.4 times to $135 (RMB 953). 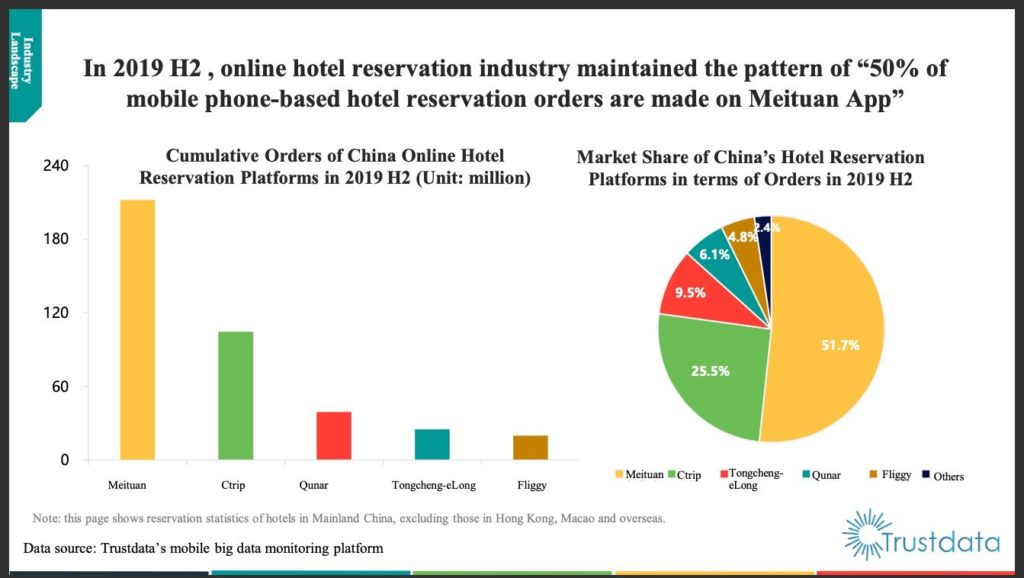 Landscape of the online hotel reservation industry in H2 2019

Meanwhile, more young consumers tend to use online hotel reservations, while the post-00s generation accounts for 10%. Users aged 30 or below account for more than 50% of the total users. Meituan and Fliggy are more popular among young users.

In terms of the market landscape, in the second half of 2019 (H2), the online hotel reservation industry maintained the pattern of 50% of mobile phone-based hotel reservations being made on Meituan App. Hotel orders placed on Meituan accounted for 51.7% of the total in H2, witnessing further growth as compared with that in the first half of the year (H1).

In terms of room nights, the proportion of room nights of Meituan kept increasing in H2 2019, reaching up to 49.8%, about half of the total. In the meantime, the number of room nights booked on Meituan continuously exceeded the total sum of that from Ctrip-related platforms for the first time in 2019, with the gap extending to 1.22 times in Q4. 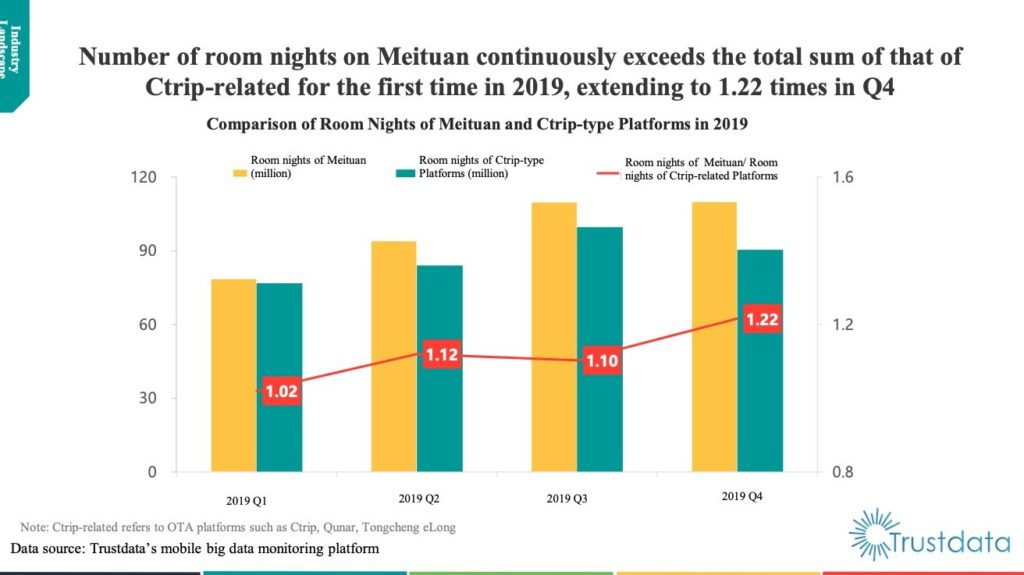 Domestic room nights booked on Meituan reached 110 million for two consecutive quarters in H2 2019 and domestic room nights increased by 38.2% year on year to 392 million throughout the year. Meituan launched the Self-discipline Convention on Epidemic Prevention in Hotel Rooms in China in cooperation with China Hospitality Association and the National Green Hotel Committee. Meituan also introduced “Safe-stay Hotels” for merchants joining the convention and guided them to implement process-based, standard and digital epidemic prevention measures to attract more users. According to statistics, 93% of users believed that pictures regarding “Safe-stay Hotels” epidemic prevention measures affected their reservation decisions, and hotels uploading epidemic prevention pictures had their room nights increased by 99% compared with other hotels during the epidemic.

The report says the outbreak of COVID-19 has significantly affected the hotel and tourism industries. Group tours and self-service tours are most seriously affected. From January to February 2020, the online operations by users was mainly seeking refunds and changing orders, accounting for 75.2%.

Tourism and ticketing may slightly recover after mid March and the industry is expected to gradually recover in April. As predicted by Trustdata, DAUs of the industry may gradually recover to 17 million from April to May. The peak of active users is expected to recover to 25 million in June. Local tours and tour around cities are predicted to become the key sources. Attracting new local tourists is a top priority of hotels.