You are at:Home»Industry»State by State Breakdown: Industry Employment Rates Plummet

WASHINGTON—The hotel industry is facing an abrupt and unprecedented drop in hotel demand that is gaining pace and getting progressively deeper and more severe week by week. The American Hotel & Lodging Association (AHLA) and top hotel CEOs met with President Trump and Congress last week to seek urgent assistance to keep hotels from shuttering and to protect millions of employees from losing jobs.

According to an Oxford Economics study for AHLA, 44% of hotel employees in every state are projected to have lost or lose their jobs in the coming weeks.

Based on current occupancy estimates, AHLA says four million total jobs have been eliminated already or are on the verge of being lost in the next few weeks. In certain affected markets, including Seattle, San Francisco, Austin and Boston, hotel occupancy rates are already down below 20% and individual hotels and major operators have already shut down operations.

“The impact to our industry is already more severe than anything we’ve seen before, including September 11th and the Great Recession of 2008 combined,” said Chip Rogers, president/CEO, AHLA. “The White House and Congress can take urgent action to protect countless jobs, provide relief to our dedicated and hardworking employees, and ensure that our small-business operators and franchise owners—who represent more than half of hotels in the country—can keep their doors open.” 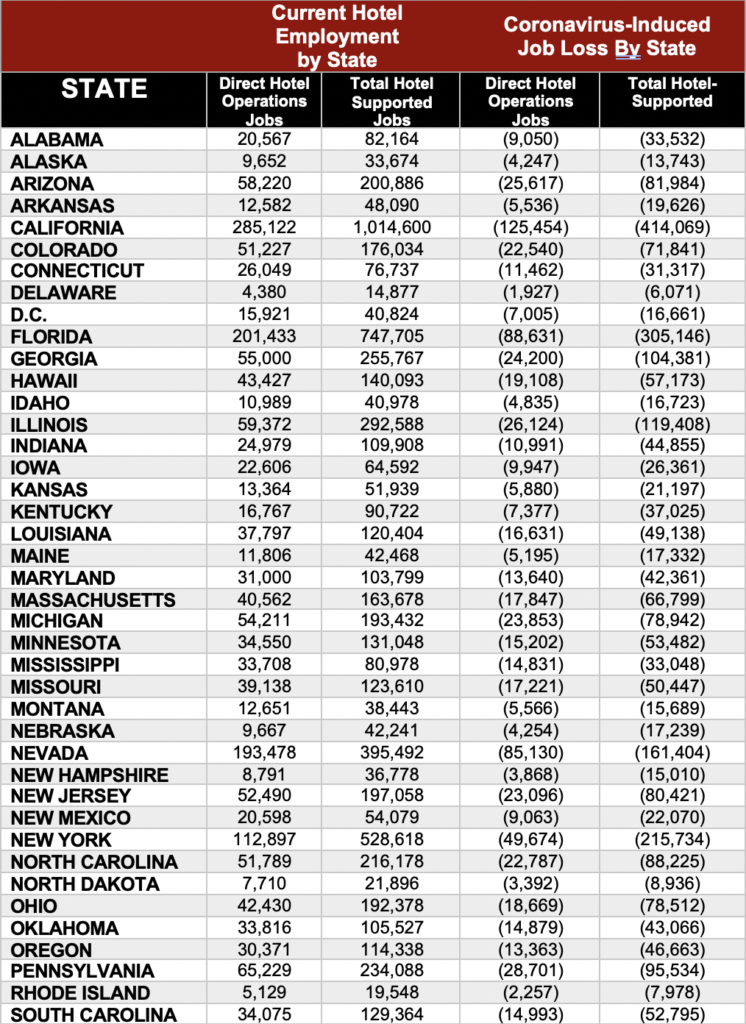 * total jobs, including supply chain; Note: figures represent proportionate impacts of U.S. hotel industry based on historical performance (each 10-percentage point decline in occupancy is shown as having the same successive impact for illustrative purposes). Economic impacts are based on Oxford Economics research for AHLA.