You are at:Home»Design»Recent Revamps in Big Cities

NATIONAL REPORT—Hotels in major cities such as Chicago, New York, San Francisco and others are sporting new looks influenced by the locale—and one design is even inspired by a TV show. See what’s new in a city near you:

The Loews Chicago O’Hare Hotel completed a multimillion-dollar renovation, including newly revamped meeting and event spaces as well as guestrooms. Chicago’s history and texture—its industry, parks, and art—influence the elegant and dynamic design.

The vision was created by interior design firm Simeone Deary Design Group, which balanced integration of nature with structure and moments of restful pause throughout the design. Inspired by “a walk in the park,” the design reflects architectural inspiration from structures of the city such as Pritzker Pavilion, Cloud Gate and Crown Fountains, as well as elements of nature through texture and color reflecting the green space found throughout the city that is a juxtaposition against the built environment.

The hotel’s 556 guestrooms, including 60 spacious suites, provide quiet moments reflecting trellised areas, lawns and other quiet escapes found within a bustling city. Warm wood tones, garden greens, and cool concretes invoke a restful pause in an inviting space. The presidential suite uses blush tones from seasonal blooms as inspiration for the furnishings and palettes, while the other suite celebrates the greenery in Grant Park as seen from a high-rise apartment.

In NYC, a New Look for Shelburne Hotel & Suites, By Affinia

With a playful nod to the hotel’s mid-century modern architecture, and a thoughtful collection of art that captures the energy and attitude of Murray Hill, these contemporary guestrooms have a voice of their own: warm colors, rich woods, layered textures and art that captures the neighborhood. 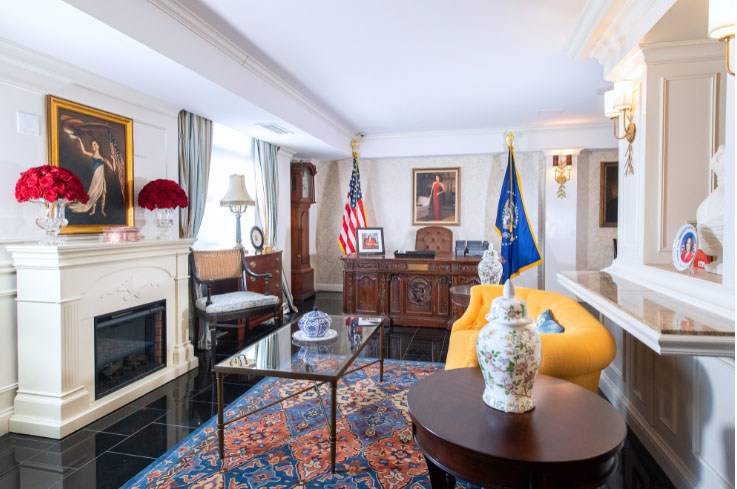 As part of its multimillion-dollar transformation, Hamilton Hotel Washington, DC is collaborating with HBO to design a presidential suite and lounge that celebrates and commemorates the network’s Emmy award-winning series Veep. The new signature guest suite pays homage to the hit comedy with original furniture, props and memorabilia from the show’s vast seven-season set collection.

As guests, visitors and fans arrive on the hotel’s 12th floor, where the suite resides, they will view a replica of President Selina Meyer’s Oval Office in the common area. Curated in conjunction with set designers and prop masters from the series’ production and HBO, original props include the Presidential Resolute Desk, a presidential seal area rug, a grandfather clock, an oversized portrait of Selina, and other recognizable photographs, art and decorative objects.

Once inside the suite, guests are transported to Selina’s brownstone residence through original set props and mementos from her home.

Hamilton Hotel partnered with Terri Jannes Interiors, based in Weston, CT, to design the suite and oval office, using the original pieces from HBO.

Targeted for completion this fall, the renovation will have a refreshed cosmopolitan design inspired by the hotel’s location and city history. BraytonHughes reimagined the hotel’s guestrooms, corridors, and meeting and event spaces, while EDG Design redesigned the lobby, arrival, and restaurant and bar spaces.

The Ritz-Carlton, South Beach will open later this year after a multi-year, property-wide renovation inclusive of guestrooms, suites, spa, club lounge, restaurants and bars, lobby, meetings and events spaces, and the pool.

Designed by firm HBA Miami, the vision for the 375 guestrooms and suites was inspired by Miami’s origins as a vast botanical garden, which later transformed with masterpieces of architecture and a strong cultural heritage to create a uniquely rich amalgam. The result is accommodations that are highly crafted and culturally contextual. The color palette seeks to reflect the blue sparkling waters, orange blossoms, brown hues of Cafecito and cigars, and the rich golds of flowing rum.