You are at:Home»Ownership»Brands»HB ON THE SCENE: Wyndham Reveals New Brand Prototypes

LAS VEGAS—Wyndham Hotels & Resorts revealed new prototypes for several of its brands at its 2019 Global Conference here at the Mandalay Bay Resort and Casino.

Among the new prototypes is Dawn for Days Inn by Wyndham, which will celebrate its 50th anniversary in 2020. “This is the dawn of a new Days Inn; this is the beginning, right now,” said Patrick Breen, SVP/brand leader, Days Inn by Wyndham. “So many hotel rooms are dark—dark wood, dark carpeting—perhaps to give them an elegant look, but we are Days Inn; we are powered by the sun. If we were a season, we would be summertime. We wanted our rooms to reflect that. Given that, the new design is adopting light colors with accents of yellow.” 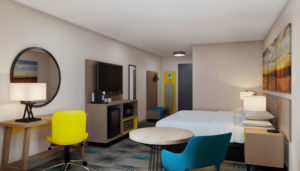 The Dawn prototype for Days Inn by Wyndham

The design will be introduced in three phases, with the first introduced at the end of next year. “The first phase is a three-panel, local photographic imagery, full-color, and a white bed topping,” he said. “You would think that a white bed topping is relatively simple, but it is not for Days Inn. It is a new idea. We wanted fresh and bright and white, and that sends a really powerful message to our customers.”

The second phase will see bigger differences, especially in the flooring, according to Breen. “Luxury vinyl tile (LVT) is a very popular flooring right now,” he said. “Some folks don’t always think that, but we are going to show them the right way to do it. Flooring just lightens and brightens a room. Carpet tends to be dark to hide the dirt. With LVT flooring, you can go light and bright.”

The last phase of the design introduction is the casegoods. “The goal for Days Inn is to get from where we are now to diversity of color and design and fabric to consistency, which is what Cecil B. Day had in mind all those years ago,” he said.

The company also revealed a new interior and exterior prototype called Arbor for its Wyndham Garden brand with a streamlined, modern aesthetic inspired by nature that is designed to reduce cost-per-key to build.

The conference also saw the introduction of  a new prototype combining its extended-stay Hawthorn Suites brand with La Quinta, which is designed to streamline development and operational costs, while appealing to multiple types of travelers. The prototype used the newly refreshed room of La Quinta’s Del Sol prototype, which continues to draw developers, with seven new-construction agreements signed in the second quarter.