You are at:Home»Ownership»Brands»HB ON THE SCENE: Wyndham Grand Reconnects Families Via Forts, S’mores and Nocturnal Adventures

NEW YORK—A long, long time ago, children played outside, where they’d explore, get dirty and await a parent calling them inside for dinner. Now, children stay indoors, engrossed by screens for entertainment, and more often than not, their parents do the same. Even on vacation, families remain glued to a black mirror. To bring families together, Wyndham Grand developed a program, with the help of outside influencers, to “reconnect” families through imaginative playtime.

“What we noticed is families spend so much time and effort to travel and come to our hotels,” said Noelle Nicolai, senior director of brand marketing for upscale brands at Wyndham, at a launch event in Midtown Manhattan. “All this time and effort, and then you come, and you’re distracted. You have phone calls, text messages or push notifications, so we’ve seen people at our pools, in our hallways or at our restaurants with their families on their phones. We really wanted to give everybody the one amenity that they can’t get anywhere else, which is uninterrupted, quality time together.”

Wyndham, more than a year ago, began constructing its program to combat potential digital distractions by looking into ways to revert childhood back to a time where “screen addiction” didn’t exist and shared memories weren’t about connecting with distant followers on social media; it was about living in the moment. 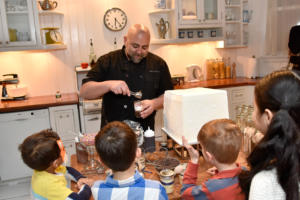 Chef Goldman teaches how to make s’mores in a jar.

Ace of Cakes star Chef Goldman has been avidly encouraging people to put down their phones and mingle. “I have a store in L.A. where people actually come and decorate their own cakes,” he said. “Their hands are busy, so their phones are down.” Wyndham’s program concept triggered his own childhood memories—many of which involved spending plenty of time with his immediate family.

“When I was a kid, we used to go camping a lot,” Goldman said. “We did a lot of stuff as a family. We took a lot of road trips and things like that.”

S’mores were also part of his childhood. Keeping this in mind, he developed a guestroom-friendly dessert—a s’mores jar, to be exact—packed with chocolate pudding, marshmallows, graham crackers, caramel, peppermint bark and sprinkles. “It’s technically not a s’mores thing, but everybody loves sprinkles,” he said. Program participants can pick and choose their s’mores toppings. 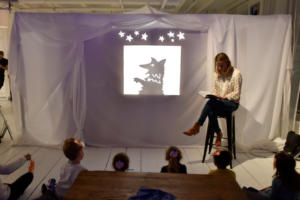 Shadow puppets act out one of Tracey Hecht’s books.

Before screens there were books. Hecht’s books (four in total) are based on three nocturnal animals: a fox, a sugar glider and a pangolin. “I wrote [the series]because I have four kids, and they don’t love bedtime,” Hecht said. “In an attempt to excite children about going to bed, each story begins at night.”

What better way to bond than being in close proximity to one another? Award-winning architects Ben Pell and Tate Overton applied the principles of architectural design to the creation of blanket forts. Children are provided with an official blueprint for the ultimate in-room blanket fort. Special toolkit materials can only be found at Wyndham Grand.

“A few years ago, we were contacted by a blog that was looking for architects who design pillow forts with their kids,” Pell said. “We put together a quick interview and a sketch showing how one might build a fort at home. We kind of forgot about it; it was a picked up by a couple of other blogs.” 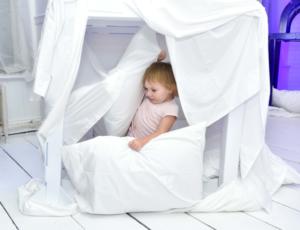 Last September, the duo was contacted about an opportunity to work with the international hotel group and agreed to participate. Pell and Overton developed three different fort types: a cave, one-room schoolhouse and castle. Each base is standard; however, the tops are distinctive—each top has its own icon to distinguish it from the rest.

The program also encourages families to take “real” photographs. Participating guests receive an Instax instant camera upon check-in, which allows them to snap a photo the analog way. No need for smartphones.

“What’s so awesome about this is we’re involved with our properties every week, so we have phone calls with them,” Nicolai said. “They give us feedback on what guests are saying. We have a survey in place, so people who book it can tell us what they thought of it. We’re checking ratings and reviews, and all of this will help us make this a better program and understand its impact.”

—Corris Little contributed to this article.