PARSIPPANY, NJ—The opening of the new 63-room Microtel by Wyndham in George, WA , represents the first hotel in the world to have the brand’s new Moda prototype.

“To now see it come out of the ground, come to life, have guests staying there, touching it, feeling it is really amazing,” Keri Putera, Microtel by Wyndham brand leader/VP of operations, told Hotel Business. 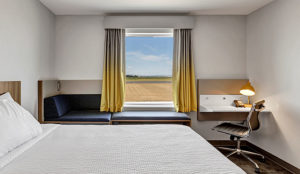 The new prototype, which was first revealed exclusively in the March 7, 2019 edition of Hotel Business, centers on smart, minimalist design. It was developed in collaboration with seasoned Microtel owners and architecture firm Hoefer Wysocki. The prototype includes three- and four-story options, helping it meet the needs of most any location. It streamlines the development process with thoughtful choices that not only help deliver a better guest experience but can afford developers the opportunity for large, incremental savings, according to Putera.

Although the Moda prototype was designed prior to the current pandemic, many aspects of it work well for the current environment. “When we started looking at our brands, we said the one prototype we want to tackle was Microtel,” said Chip Ohlsson, EVP/chief development officer, Wyndham Hotels & Resorts. “We love building at an economy price point and getting the returns that you do on midscale. That is so important to us, but now it is more important than ever. We had no idea that when we launched the prototype a year ago we would be headed toward this—call it a downturn, call it a pandemic, whatever you want—but as people now are coming out of this and looking to build, maybe some of the projects they were going to build, they can’t get financing on, or it’s too cumbersome, too costly, the efficiencies aren’t there.”

Ohlsson said the new prototype will help them. “We have 28% efficiencies on that prototype and you save about 11% on the square footage of land that you need: what a better time to be coming out of this when all of the other projects are stalled or stopping. We’re going to be able now to continue to build our pipeline and build this brand across the U.S.,” he said.

Putera added, “What we were trying to do is make sure we created a product that would reduce costs to our developers and allow them to really create and build at an economy price, yet get those midscale returns that they have always gotten in the past and do it with a new modern look and feel that really increased the efficiencies. We have done just that.”

Those efficiencies have led to an expanded lobby space. “We have completely expanded the lobby space,” she said. “The lobby space has retail windows completely expanded and we now have 70% rentable square footage in the building, so you don’t have any of that excess waste. That 70% rentable square footage is actually higher than any other economy or midscale brand out there. What it allows an owner to do is be able to be more profitable because his space is being used better.”

The guestroom efficiencies are also suited to the new normal. “We’re in this age of asking ‘How do we clean the guestrooms more efficiently? How do we make it more effective?’” said Ohlsson. “There is no better room than a Microtel room for a housekeeper to be able to go into when you have a built-in headboard and built-in baseboards that make it very easy to clean. There is nothing you have to lift and move around in order to vacuum under. We know that the new normal is going to require housekeepers to increase the time that they clean a guestroom.”

He continued, “We were already 33% more efficient in our guestrooms, as far as the time it took them to clean it. Now, you are talking about making it the same as everyone else when you are adding 25% to 35% more time to clean a guestroom. They now are going to be 33% more efficient in the cleaning of that guestroom and be able to do more in less time, which is a cost savings to the owner. If you look at that room, it has that minimalist feel that the millennials are out there craving right now. They will be able to walk in and say this looks like a streamlined, clean room. There isn’t excess cubby holes and places where dust and viruses can gather. This room is really built for today’s traveler.”

The Microtel by Wyndham George, which was developed by Caleb McNamara, is the brand’s first hotel in the State of Washington. “The brand was created in Rochester, NY, and we have a stronger footprint on the East Coast because of distribution over the past few years that the brand has been around,” said Putera. “But Chip and his team have done a great job of really focusing on how we take the success we’ve seen and really continue to move it out to the West Coast. We are excited to be in the State of Washington with this first prototype.”

Another Microtel by Wyndham featuring the Moda prototype is slated to open later this year in Hot Springs, AR. Other markets under development include Destin and Fort Walton Beach, FL; Saint Rose and Chalmette, LA; Asheville, NC; and Midland, TX.