LOS ANGELES—In the hospitality industry, men have been 10 times more likely to be promoted to the principal/partner or president levels than women, according to a report released at this year’s ALIS Conference. 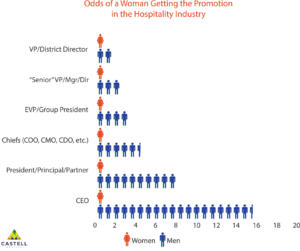 Promotion Odds for Women in Hospitality

The report finds that while women are of particular importance to the hospitality industry, they are not in a proportional number of leadership roles. “They make most of the purchase decisions driving demand, are the majority of industry employees and dominate university hospitality enrollment. Industry leadership today is not aligned with its market, employee base or talent pipeline,” the report reads.

The report finds that compared to the firms of the S&P 500 and the S&P 500 Finance, the hospitality industry has been less successful at developing its women at every level of management, despite its dependence on women. “Moving women into leadership is a significant social change and requires overcoming deep unconscious biases,” said Peggy Berg, director of the Castell Project. “It only happens when companies define diversity as a goal and support that goal with resources and accountability.”

Conference attendance and speaker participation were also analyzed, with women making up only 22% of attendees at the four hotel investment conferences in 2016-17. In the same time period, women made up only 13% of panelists, 17% of moderators and 12% of main stage speakers. “Companies that put women on the podium find that they are more visible, make a positive impression and make panels more lively,” said Berg. “Making the effort to put women on the podium is good for their employers. Development and finance are unusually resistant to diversity. As a result, women are underrepresented at hotel investment conferences.”

AHLA ALIS Castell Project Diversity
Previous ArticleOutlook: Hospitality Poised for Growth in Bookings in 2018
Next Article The Numbers—What Are We Dealing With & Where Are We Headed?