ATLANTA—CBRE has released its updated 2020 hotels forecast, expecting GDP growth will slow to 0.4% in 2020, down from its previous estimate of 1.9%. The COVID-19 outbreak will cause a sharp drop in economic activity in Q2. As early as Q3 2020, activity will begin to stabilize and a recovery is expected to be underway by Q4. Employment is already contracting with service sector jobs disappearing as many cities restrict social interaction. Governments throughout the world are implementing monetary and fiscal stimulus to try to prevent a more long-term global recession. CBRE’s current expectations are that this stimulus, as well as pent-up demand, will lead to a substantial rebound in economic activity in 2021.

The lodging sector will face two headwinds: a contraction in overall economic activity, and the need for social distancing, which encourages staying at home or in settings with few other humans and not traveling. This will cause a severe decline in lodging demand in the U.S., as it has in other countries. CBRE estimates that RevPAR will decline 37% in 2020, with a contraction of more than 60% in Q2. Prior to the spread of COVID-19 into the U.S., CBRE had forecasted a 0.1% decline in RevPAR. 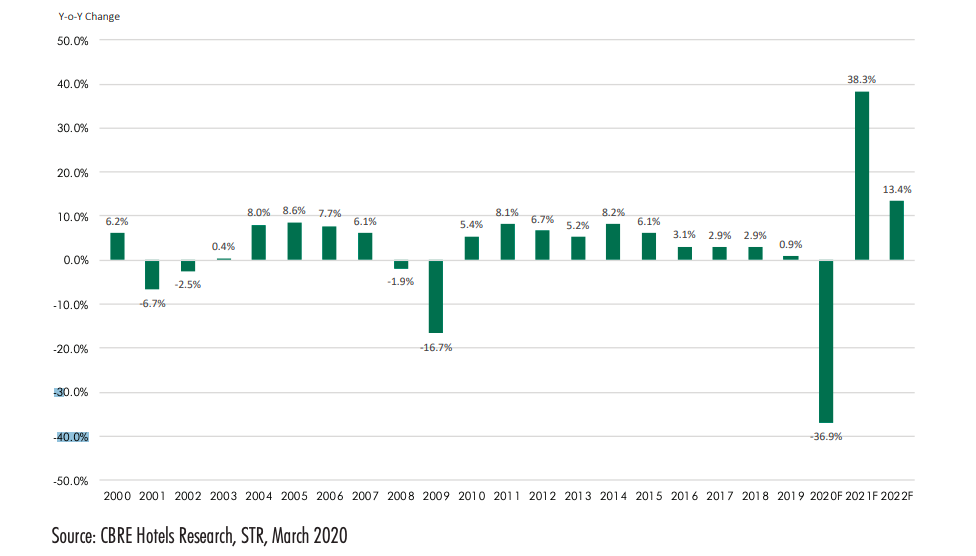 The expected declines in RevPAR will be worse than experienced in the 2001 and 2009 economic downturns combined. However, given the expected quick rebound in economic growth and historic resiliency of travel demand, CBRE forecasts a strong hotel revenue recovery in 2020 and 2021 and that RevPAR could recover to pre-recession levels by 2022.

To get a sense of impact and recovery times, CBRE looked at previous demand shocks, namely the tech bubble, 9/11, SARS and the Great Financial Crisis (GFC). The declines to demand during these shocks were severe, but relatively short lived with demand returning to pre-shock levels within six to 12 months.

CBRE expects the impact to be greatest in gateway cities that cater to international and business travelers, and that accommodate large groups for conventions and conferences. Similarly, 9/11 primarily impacted these same markets and spared many drive-to markets. 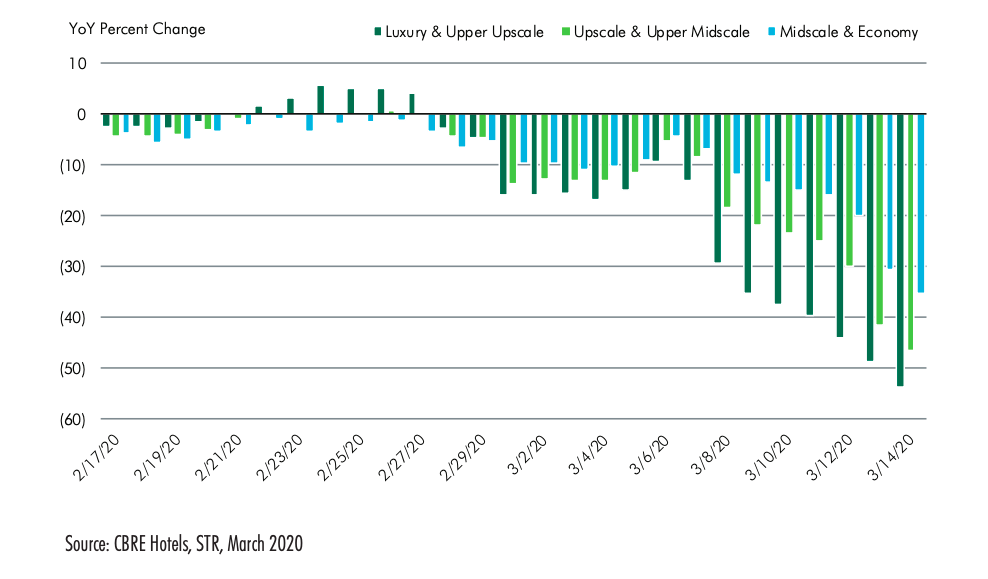 YoY change in U.S. RevPAR during the COVID-19 pandemic

Markets that have their peak season during the spring (March-May) will also see a more severe impact since these months can generate a significant portion of their full year revenues and profits. U.S. hotels average about 5% more revenue during the spring travel season. These hotels will not only realize the same declines in occupancy that most markets will see, but also lose out on the large ADR premium hotels were able to charge during the peak time.

Not all chain scales will feel the impact evenly. Luxury, upper-upscale and upscale properties will be affected the most because of their dependency on group, business and international visitations. This follows trends during previous recessions.