You are at:Home»Industry»Research»CBRE: Supply Growth to Peak in 2018

Based on the recently released March 2018 edition of Hotel Horizons, CBRE Hotels’ Americas Research is forecasting the net addition of approximately 101,000 rooms to the U.S. lodging inventory during 2018, an increase of 2% over 2017 average annual daily supply. This is the largest number of new rooms to enter the market since the 130,000 rooms that came online in 2009.

“The national changes in supply are less than what we observed during the latter year cycles of the 1980s, 1990s and 2000s, so the national occupancy levels are still at all-time peaks. When analyzing the local markets, we begin to see the impact of the new supply on changes in occupancy and average daily rate (ADR),” said R. Mark Woodworth, senior managing director of CBRE Hotels’ Americas Research. “In 2018, 42 of the 60 markets covered by our Hotel Horizons forecasts are projected to see an increase in supply greater than the 2% national average. These are the markets most vulnerable to negative impacts on performance.”

In the 42 markets forecast to experience a supply increase greater than 2%, occupancy levels are projected to decline on average by 0.6%, while the ADR is expected to increase by 2.4%. Both measures are below the average changes estimated for the remaining 18 markets. During 2018, hotels in the markets that are forecast to see a supply change of less than 2% should experience increases in both occupancy (0.2%) and ADR (3.4%). 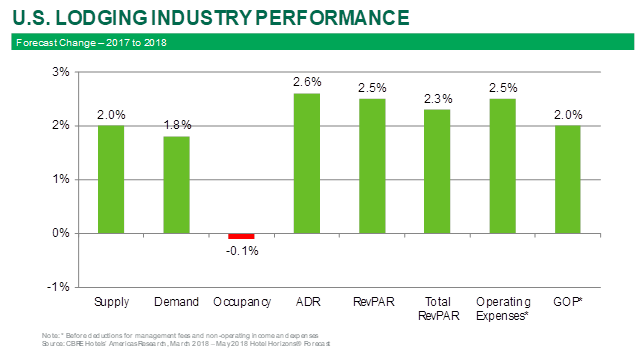 “Beyond 2018, we are expecting the pace of new hotel construction to hover around the 2% mark, but the number of net new rooms per year will taper. This is the natural progression after years of slight occupancy declines and decelerating ADR,” Woodworth said.

CBRE is forecasting a national average occupancy of 65.8%, down slightly from the 65.9% achieved in 2017. National occupancy levels are forecast to remain flat in 2019 and decline in 2020. Concurrently, annual ADR change will slow down after 2018.

“The declines in occupancy forecast by CBRE for 2018 are not solely attributable to the increases in supply,” said John B. (Jack) Corgel, Ph.D., professor of real estate at the Cornell University School of Hotel Administration and senior advisor to CBRE Hotels’ Americas Research. “We also are forecasting demand growth slowdown from 2.7% in 2017 to 1.8% in 2018.”

“Much of the increase in lodging demand during the latter part of 2017 can be attributed to the impact of Hurricanes Harvey and Irma. An influx of displaced residents, insurance adjusters, repair personnel and other disaster responders caused significant increases in demand in several Florida and Texas markets,” Corgel said. “Given the unique circumstances that helped bolster performance in 2017, it is unlikely this level of demand growth will be repeated in 2018.”

“Strong national occupancy levels and decelerating changes in ADR will characterize U.S. lodging performance over the next few years. It is important to pay attention to local market conditions, especially in those areas where there will be significant gains in supply,” Woodworth concluded.