You are at:Home»Ownership»Brands»Cambria Sets Record with 11 Openings in Top-Tier Markets

“2019 was truly a banner year for the Cambria Hotels brand—between breaking our openings record, reaching 50 locations and capping off the year by opening the doors of our largest hotel. Add to that the numerous top-tier business and leisure destinations we brought the Cambria brand to such as Boston, Houston and Phoenix—to name just a few—and it’s no surprise why our franchisees are so excited about the growth of this brand,” said Janis Cannon, SVP, upscale brands, Choice Hotels.

“We look forward to building on our coast-to-coast expansion in 2020 and expect to beat our openings record for a second-consecutive year, along with beginning construction on 14 hotels, in addition to the 26 already underway,” she continued. “That way, we can provide time-starved, modern business travelers with even more upscale options in central locations for years to come—like in Minneapolis to start this year.”

With one of the nation’s highest concentrations of Fortune 500 companies and more than 38 million people traveling through the Minneapolis-Saint Paul International Airport annually, the Cambria Hotel Bloomington Mall of America joins the Cambria Hotel Minneapolis Maple Grove and the Cambria hotel planned for downtown Minneapolis, which is slated to open in 2021.

Located at 8001 28th Ave. South, the hotel is adjacent to the Mall of America, the largest mall in North America, which offers guests access to retail, dining and entertainment options. The property is also within walking distance to the light rail. 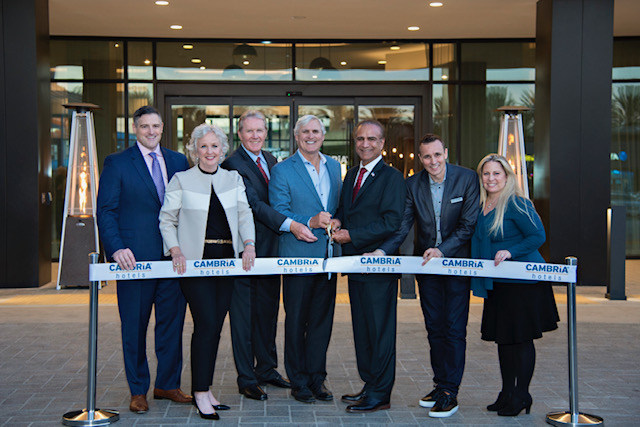 In addition, the opening of the 12-story, 352-room Cambria Hotel Anaheim Resort Area was marked with a ribbon cutting ceremony. Anaheim Mayor Harry Sidhu and representatives from Visit Anaheim, the city’s tourism marketing organization, joined executives from Choice Hotels and Cambria Hotels for the occasion. The event drew inspiration from the hotel’s location in the heart of Orange County, CA, and highlighted the hotel’s amenities, such as a water park, outdoor movie wall and putting green.

“In addition to the brand’s record-breaking year for openings, Cambria Hotels continues to be highly sought after by developers. In fact, the brand’s pipeline has grown to become one of the largest in North America with nearly 80 hotels,” said Mark Shalala, SVP, development, upscale brands, Choice Hotels. “In December alone, we awarded a dozen franchise agreements to close out the year strong and fuel our future growth in cities including Chicago; Colorado Springs, CO; Miami; and Oakland, CA.”