MCLEAN, VA—Hospitality Sales and Marketing Association International (HSMAI) Foundation has partnered with the U.S. Chamber of Commerce Foundation’s Hiring Our Heroes initiative (HOH) to help employ military spouses. The partnership aims to create workforce development initiatives for the group by seeking out hospitality career opportunities. The joint-effort will also develop a new fellowship, allowing spouses to participate in a six-week learning program with hotel brands, exposing them to jobs in hospitality sales, marketing and revenue management.

“The hospitality industry cannot grow without talent,” said Tessa Robinson, military spouse liaison, HSMAI Foundation. “Military spouses are perfectly suited to serve in the hospitality industry. First, they’re already a global force. They are flexible, loyal and fiercely resilient. Having handled moves, deployments and other unique challenges (and frequently on their own), military spouses are excellent problem-solvers and project managers. They also have great senses of humor, are very adaptable to change and understand the importance of fostering a great team environment.”

According to Robinson, 49% of military spouses have at least some college education, and these spouses—91% of which are women with an average age of 31.5—are often unemployed due to frequent geographic moves that can lead to employment gaps. 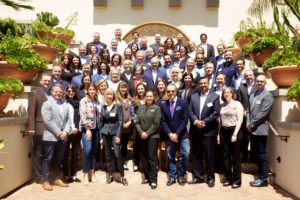 HSMAI Foundation and HOH also plan to host events and webinars with these workers.

The pilot program is beginning with Accor in Washington, DC, this summer, providing HOH with the six-week work experience fellowship to qualified military spouses at Accor hotels in the area.

In addition, they’re working with other brands, individual hotels and HSMAI chapters in Phoenix, AZ; Las Vegas; Colorado Springs, CO; and Austin, TX, all with a military presence and supporting HOH job fairs, conferences and training.

“HSMAI Foundation is also exploring ways to help ensure that human resource officers learn about the challenges of military spouse employment, including breaks in employment and underemployment of necessity,” said Fran Brasseux, president, HSMAI Foundation. “Military spouses have skills that often are not reflected on their resumes: tenacity, the ability to deal with stress and ambiguity, the ability to network and connect, and awareness of global diversity. Developing a sensitivity to the employment realities of these talented workers is an important aspect of hiring veterans and military spouses.”

The partnership began when the foundation’s Board of Directors began researching opportunities to attract new talent.

“Through networking with leaders inside and outside the industry, the president of the foundation connected with spokespeople for military spouses and began building awareness of opportunities to connect with these talented people,” said Agnelo Fernandes, chair, HSMAI Foundation, as well as chief strategy officer/EVP, Terranea Resort. “The networking led to a meeting with Eric Eversole, VP at the U.S. Chamber of Commerce Foundation and president of Hiring Our Heroes. The obvious fit between the two organizations led to the partnership.”