You are at:Home»Industry»AAA: Nearly 47M Americans Will Travel on July 4

ORLANDO, FL—A record-breaking 46.9 million Americans will travel 50 miles or more away from home this Independence Day holiday, an increase of more than five percent compared with last year and the highest number since AAA started tracking 18 years ago.

For the 39.7 million Americans planning a Fourth of July road trip, INRIX, a global transportation analytics company, predicts travel times in the most congested cities in the U.S. could be twice as long than the normal trip, with Tuesday being the busiest day.

“This Independence Day will be one for the record books, as more Americans take to the nation’s roads, skies, rails and waterways than ever before,” said Bill Sutherland, SVP, AAA Travel and Publishing. “Confident consumers with additional disposable income will look to spend on travel this holiday, building on an already busy summer travel season.” 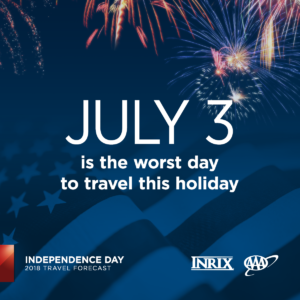 In addition to strong economic variables, the expected increase in travelers this year is helped by Independence Day falling on a Wednesday, giving travelers more flexibility to schedule a trip the weekend before or after the holiday. The Independence Day holiday period is defined as Tuesday, July 3 to Sunday, July 8.

INRIX, in collaboration with AAA, predicts drivers will experience the worst congestion over the holiday week on Tuesday, July 3 in the late afternoon—as commuters leave work early and mix with holiday travelers. Travel times could increase two-fold in the major metros across the U.S., with drivers in Los Angeles, New York and Washington, D.C. experiencing the most significant delays.

“With a record-level number of travelers hitting the road this holiday, drivers must be prepared for delays around major metros,” said Scott Sedlik, GM and VP for public sector, INRIX. “Although travel times are expected to nominally increase throughout the week, Tuesday afternoon will hands down be the worst time to be on the road. Our advice to drivers is to avoid peak commuting hours altogether or consider alternative routes.” 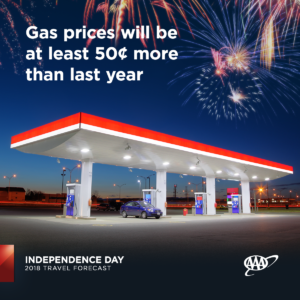 Gas prices have slowly but steadily started to fall since the 2018 high of $2.97 set over Memorial Day weekend. Since then, the national gas price has dropped nine cents to $2.88 (as of June 20), which is 59 cents more than one year ago. However, the higher prices are having little effect on travelers this Independence Day, with record number of travelers still planning to hit the road this year.

According to AAA’s Leisure Travel Index, travelers taking to the skies will pay an average $171 for a round-trip flight along the top 40 domestic routes. That is the lowest Independence Day airfare in five years, and nine percent less than last year.

However, travelers can expect to pay more to rent a car and stay at mid-range hotels this Independence Day. At $66, the average daily cost of a car rental is a slight increase of two percent over last year. The average nightly rate at AAA Two Diamond hotels is $147, 11% more than last year, while AAA Three Diamond hotels will average $187, a two percent year-over-year increase.

Theme Parks and Europe are Major Draws this Independence Day

This Independence Day, travelers will flock to theme parks in Orlando and southern California, while many others are heading west. Alaska cruises departing from Seattle, Anchorage and Vancouver round out the top five U.S. travel destinations for the holiday. For those venturing overseas, Europe is a major draw, with Rome, London, Dublin and Paris all making the list of top international travel destinations for Independence Day. 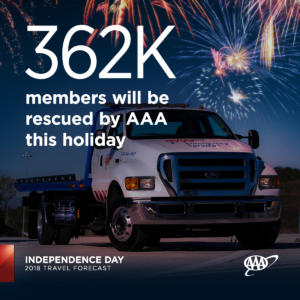 AAA expects to rescue more than 362,000 motorists at the roadside around the Independence Day holiday. Dead batteries, lockouts and flat tires will be the leading reasons AAA members will experience car trouble. AAA recommends motorists take their vehicle to a trusted repair facility to perform any needed maintenance before heading out. Oil changes, fluid level checks, battery tests and tire inspections go a long way toward reducing the chances of a breakdown.

AAA’s projections are based on economic forecasting and research by IHS Markit. The London-based business information provider teamed with AAA in 2009 to jointly analyze travel trends during major holidays. AAA has been reporting on holiday travel trends for more than two decades.