You are at:Home»Operations»Guest Services & Programs»A Yankees Great Slept Here and Now Others Can, Too

NEW YORK—One night in the suite that once served as home base for Yankees great Joe DiMaggio and his then-wife, Hollywood actress Marilyn Monroe, might have guests uttering the notable words of sports announcer Phil Rizzuto: “Holy cow, it’s a hit!”

At The Lexington Hotel, it’s all about paying homage to legends, and these stars are one of many that have played a role in its long history. The hotel is offering guests a “Home Run Package” during the entire 2018 baseball season, which includes a Yankees hat, box of Cracker Jacks and soda, and a round trip Metrocard with a reservation for the aptly named Centerfield Suite.

“Since 1929, we have welcomed global leaders, international celebrities, business executives and famous sports icons—Hall of Fame New York Yankees legend Joe DiMaggio, being one of them,” said The Lexington Hotel’s Area Managing Director Kaizad Charna. “As the 2018 baseball season was approaching, we wanted to find a unique way to honor the legend while giving our guests the chance to experience the historic landmark suite. The Home Run Package has been well-received from guests and continues to generate interest from baseball fans visiting New York.” 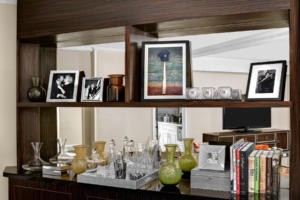 Memorabilia is on display at The Centerfield Suite at The Lexington Hotel in NYC.

Step inside the Centerfield Suite—formerly a one-bedroom apartment that DiMaggio once lived in with Monroe during the couple’s brief marriage—and there are distinctive touches everywhere. The 600-sq.-ft. space features artwork throughout the suite paying homage to them, including an art-filled marble entry foyer, along with reading material and baseball memorabilia.

Elsewhere in the suite, there’s a bathroom outfitted with a soaking tub and a kitchen equipped with a microwave, Keurig coffeemaker, full-size sub-zero refrigerator and sink. A spacious living room includes a 55-in. high-definition flat-screen TV, sofa bed and dining area for four guests that leads out to a 200-sq.-ft. terrace. “It’s perfect for entertaining like Hollywood royalty,” said Charna.

The foyer of the Centerfield Suite is reminiscent of a traditional pre-war New York City apartment and features a black-and-white diamond floor, cream-colored walls and subtle accents. The room’s focal point is an oversized painting of Yankee Stadium, one of many references to the suite’s famous residents. The bookshelf also holds some of DiMaggio’s memorabilia. 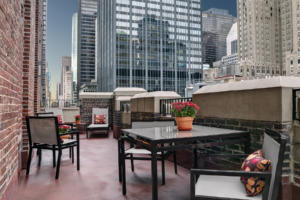 City views from an outdoor patio at The Centerfield Suite at The Lexington Hotel in NYC.

“Marilyn Monroe and Joe DiMaggio resided in Suite 1806—what is now known as The Centerfield Suite—of The Lexington Hotel during their brief marriage. DiMaggio went on to stay a resident of the hotel for several years in the 1950s, after their divorce,” said Charna. “To me, one of the most interesting facts that people might not realize is that Marilyn’s popular publicity stunt in 1954 while filming The Seven Year Itch, happened just steps from our door. The film was shot in Hollywood, but the studio wanted to generate publicity in New York, thus staging the filming of a scene. In the shoot, Marilyn is standing on a subway grate with the air blowing up her dress, which ultimately became an iconic image, and one of the most well-known moments of her career.”

After a recent $46-million renovation, Charna noted that the hotel unveiled a series of specialty suites that tie back to different legends associated with the hotel, including The Centerfield Suite; The Lady Ella Suite (inspired by its namesake—the queen of jazz—Ella Fitzgerald); The Hemingway Suite (inspired by novelist Ernest Hemingway); and the Arthur Godfrey Suite (in honor of the famous TV personality who would broadcast his radio show live from The Hawaiian Room in the 1960s).

“The Lexington Hotel prides itself on its past and all that it is has accomplished since 1929,” he said. “It was essential for us to design suites that offer guests an authentic experience rooted in the hotel’s rich history, while bringing those historical references to life.”